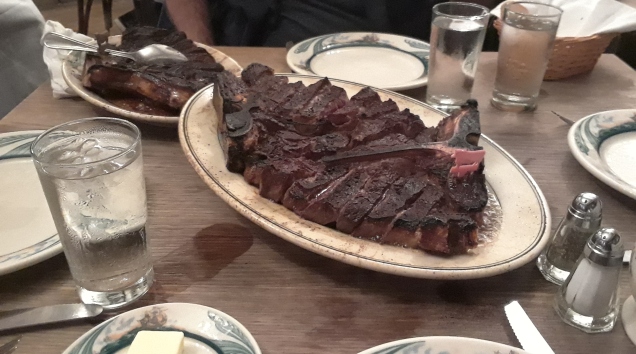 Peter Luger Steakhouse is an institution in New York City. It’s been around a long time and set the standard for New York City steakhouses. I came by with muted expectations and got exactly what I expected. Peter Luger is a decent steakhouse with mediocre sides and decent prices considering the product they sell and what their competitors price their steaks at.

END_OF_DOCUMENT_TOKEN_TO_BE_REPLACED

Di Fara pizza has been hailed by many New York City food publications as the greatest slice in New York City. That’s bold praise. After hearing about this place for many years, I decided to go down to Avenue J and give it a try.

I read that the lines for this place are crazy so I decided to try coming by on a weekday. I came by on a Thursday and arrived at 12:00 PM, which was the time they were supposed to open. Doors actually opened at around 12:30 PM. There were a few people here, but not much of a line and I got my food somewhat promptly.

The draw of this place is its insistence on sticking with tradition. Established in 1965, Di Fara’s pizza has been made by Dom DeMarco the entire time. When I walked into the dimly lit pizzeria, Dom DeMarco, now an old man, was still there, making the pizzas for all to see.

The way things work is that you, the customer, walk up to someone taking orders, he will write your name onto a list and then you wait for your slices to be made. The wait for pizza was around twenty minutes for me from taking my order. That does not include time waiting on a line since there was almost no line for me when I went. I ordered a square slice and a regular slice for $6 and $5 respectively.

So, do I think that Di Fara’s pizza is the best pizza in New York City? Hell no. I’ve had much better slices at lower prices elsewhere in the city. Do I think the slices I got on my trip to Di Fara’s were good? The answer’s still no. The pizza here was not the worst pizza I’ve ever had, but it certainly wasn’t all that good.

If you want a description of the taste, it tastes like pizza. It’s thin crust, I saw him put a couple kinds of cheese on it, the cheese is unevenly distributed, he adds olive oil to the pizza before putting it into the oven. After taking it out of the oven, he sprinkles some more cheese over it and cuts up some basil (I think) over the pizza before cutting it up and serving.

I have no idea how the food publications concluded that this slice was not just good, but the best in the city. Perhaps the quality has dropped off in recent years as DeMarco’s age has advanced. Perhaps DeMarco was having an off day. I don’t know. All I know is that I did not enjoy these slices all that much. They were at best, just okay.

Overall, this place isn’t worth the trip out to Avenue J in my opinion. The slices I had were not the best. They were, at best, barely satisfactory.

Came here for brunch. My friend ordered the pancakes with coffee and I had smoked Pollock fish cake with the ginger agua fresca. They have a prix fixe menu which is just anything on the menu and a drink for seventeen dollars. It was all right.